Our Special Relationship with the US dates from William Penn and the founding fathers. Our shared language and culture (especially in those early colonial days) has created a mutual bond that we still enjoy today.

In our concert held on 29th November 2014 we highlighted the importance of the work of the ‘English Folk Movement’ spearheaded by Cecil Sharp and his musician colleagues without whom we would be much the poorer. Collectively these men travelled the length and breadth of this country seeking out (often elderly) folk singers who could still remember local traditional songs learned from grandparents and great grandparents. Because of their passion for collecting, many wonderful folk songs that could have been lost forever are now preserved and written down.

In addition, we explored some songs that have become so deeply embedded in the culture of our two nations that one could argue for for their inclusion in the national ‘folk canon’ and who can say whether these songs will, indeed, be viewed by future generations as the folk music of our own times. 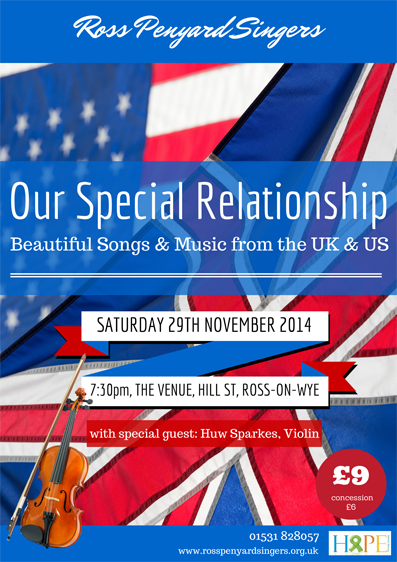