On Saturday 11th September, we delivered two performances of madrigals and modern ballads during a Heritage Open Day Event at Coningsby Hospital, Hereford. We were also able to enjoy some time and a picnic in the Rose Garden and ruins of the Priory. The stone Preaching Cross set within the garden is one of the last surviving examples of such a cross.

The site was once occupied by a house of the Knights of St John of Jerusalem. Sir Thomas Coningsby of Hampton Court, Hereford, founded the almshouse in 1614 as a refuge for soldiers and mariners. We were able to explore the museum in the old dining hall, which explains the links between the Crusades, the Knights Templar and The Hospitaller Knights, and see the Chapel, which is still used as a place of worship today by the Order of St. John. We learned about the foundation of the Coningsby Red Coat Hospital and how Nell Gwynne is credited with having persuaded Charles II to found the Chelsea Hospital after the fashion of Coningsby. 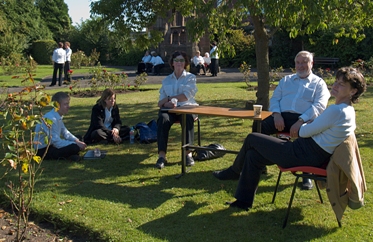